Every year since the start of Blog.SpoonGraphics in April 2007 I have created a special anniversary post celebrating the growth and success of my little blog. Despite being a pretty big milestone this year I had forgotten all about my little tradition. Thankfully I remembered just in time to bring you my 5 years of Blog.SpoonGraphics overview on the last day of April. Let’s take a look at changes in stats and figures over the past year. 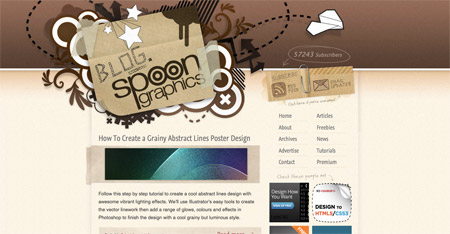 Design wise as you can see I’m still rocking the same old theme design from 2007. As documented in previous anniversary post there’s been little changes here and there with just the header being the only section of the design that has remained pretty much the same. 2009 saw the last major overhaul of the design, since then the site has remained unchanged. Maybe it’s time for another refresh?

It’s great to see the number of daily visitors and pageviews steadily increasing as more and more content is archived into the search engines. My top content is still two roundups of resources. These two posts in particular have 1st place Google positions for their relative topics so I don’t expect to knock them off the top spot anytime soon.

RSS subscriber count has actually dropped since last year. I noted in past overview posts that Feedburner stats on both my blogs suddenly plateaued from October 2010, so whether this is a Feedburner issue or whether people just don’t use RSS anymore I don’t know! Another strange Feedburner stat is that my ‘Reach’ suddenly dropped from over 7000 to less than 150 in the space of one day back in July 2011, and has remained this low ever since (blue line in the above graph).

Powered by: WordPress
Hosted on: 4GB VPS (Frontend) + 1GB VPS (Databases)
Server location: Chicago
Thanks to the W3 Total Cache plugin and some server tweaking from @crouchy, @cleatsandcode and @davidsilburn the average load is around 0.3 and memory usage is around 20%. I could afford to downsize my servers but the extra resources are handy to have should my site experience a large traffic influx.
A recent update to the W3 Total Cache plugin greatly improved my site’s response time too, from around 3000ms down to a snappy 400ms.

In previous anniversary posts I’ve shown how the increased exposure I received from my blog has led to features on design websites and magazines, but I never really talked about how my blog has helped with my overall career.
The first big milestone was back in 2009 when my blog initially reached a stage where it was bringing in freelance projects that allowed me to go self employed. In 2010 I mentioned how my blog had grown enough to allow me to cut down on freelance work, and now I’m running my blogs as my full time job alongside my YouTube gaming channel, which as of late 2011 became partnered with IGN Entertainment.

Creating fun designs tutorials to help people learn new techniques and sharing tips from my favourite video games is by far the best job I could have ever imagined, so thank you to everyone who has taken the time to read my content over the years.