How To Create a Cute Vector Mushroom Character 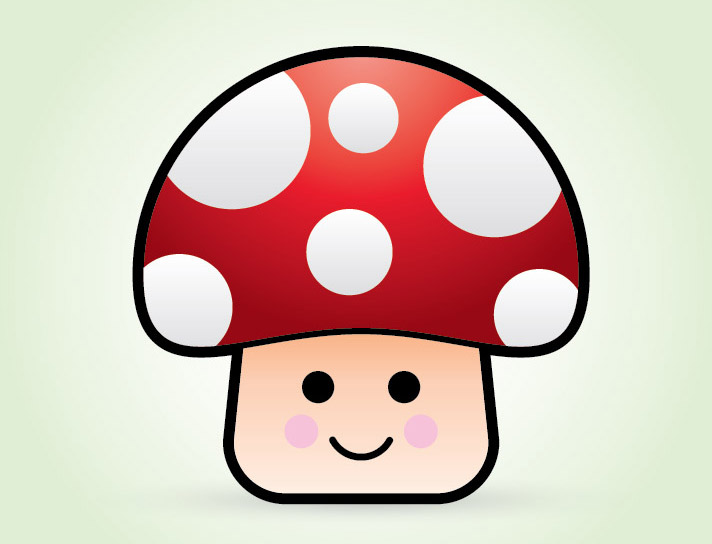 Follow this step by step Illustrator tutorial to create a cute vector mushroom character with a Japanese kawaii influence. We’ll create the basic structure using Illustrator’s basic shapes, add variation in the linework to define the character then finish it all off with some vibrant colour fills. The character we’ll be making is a little mushroom with that typical super cute Japanese style. The simple shapes and soft round edges all add to the attraction and help make the character loveable. There’s essentially three steps: The creation of the basic character structure; The variation in strokes to define the character’s outline; Then the addition of colour fills to bring the character to life. Draw a circle on the artboard while holding Shift. Use the Direction Selection tool to drag the uppermost point vertically to deform the lower edge. Use the Direct Selection tool to select all the uppermost points of the rounded rectangle then go to Object > Transform > Scale. Enter 80% in the options window. Draw a bunch of randomly sized circles over the mushroom head to create a series of spots. Make sure some of the circles overlap the edges so they’ll appear to wrap around the shape. Copy (CMD+C) and Paste in Front (CMD+F) a duplicate of the mushroom head. Press CMD+Shift+] to make sure it’s at the top of the stack, then with both the compound path and this duplicate selected, hit the Intersect option from the Pathfinder palette. Draw a black filled circle as an eye, then hold Shift and Alt to drag a duplicate. Group the two eyes then align them centrally to the main body. Make sure the body is activated as the key object so it doesn’t move out of place. Draw a circle with a black stroke then drag a guide to cut across the lower portion. Split the path according to the guide using the Scissors tool then delete out the upper section. Bump up the stroke to around 5pt and select the Round Cap option to create a cute little smile. Align the smile to the main body using the Align palette, remember to give the body shape an extra click to select it as the key object. Duplicate the main body and head shapes (CMD+C / CMD+F) and merge them together with the Pathfinder palette. Increase the stroke of this main outline to around 11pt and select the Align to Outside option from the Stroke palette. Adjust the stroke of the original head shape to around 6pt, aligning it to the outside. Add some simple colour fills to the original character shapes, such as red for the head and light flesh colour for the stalk/body. Don’t forget a couple of pink circles as rosy cheeks. Use these basic colour fills as foundations for a more complex gradient. Create two more gradient handles, one lighter and one darker then alter the gradient to flow over the mushroom head. Create another gradient for the mushroom stalk/body and alter the gradient to flow vertically with the darkest colour towards the top to act as a shadow. A very soft grey to white gradient can be added to the spots to give them a touch of depth as opposed to the otherwise flat white fills. Finish off the character with a nice background. Create a radial fill from white to a subtle pastel green inside a rectangle. Add a grey to transparent radial gradient fill to a circle, squash it down then position it underneath the character to create a shadow. Use the CMD+Shift+[ shortcut to send the shadow to the back, then press CMD+] to bring it up one level above the background rectangle.

That leaves our cute little Japanese inspired vector mushroom character complete. The overall structure of the character is made from basic round shapes to give it that friendly appearance. The varied linework helps define the outlines and the colour fills bring it to life with gradients to add depth and definition.

Next in Tutorials: How To Create a Colorful Logo Style Ribbon Graphic Close
Top