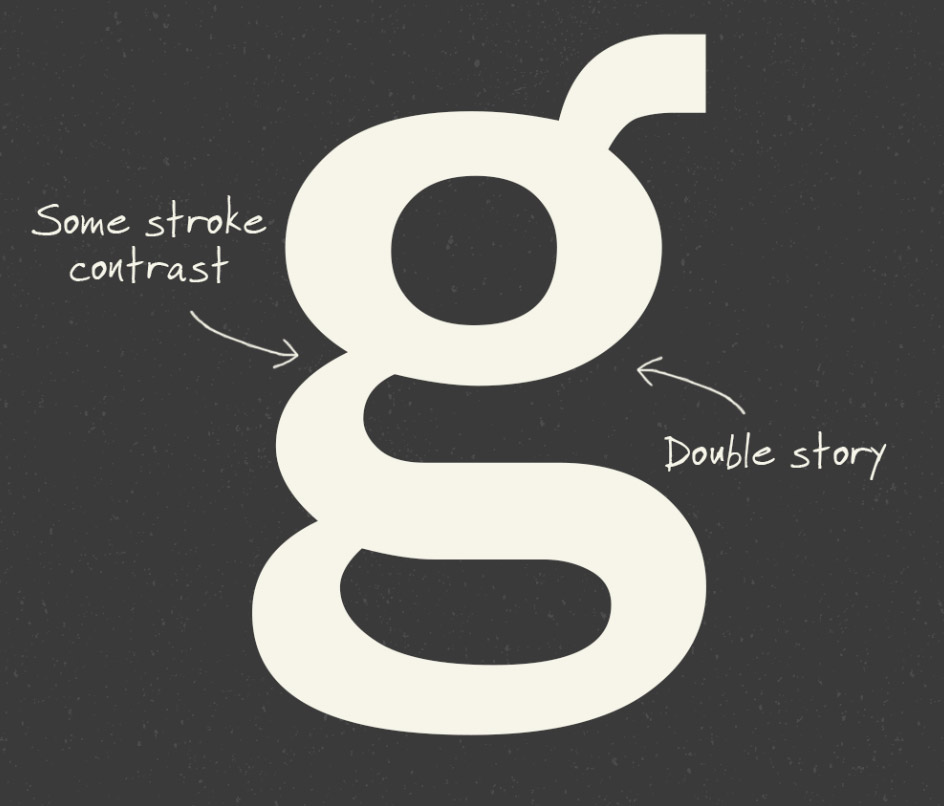 Typography is a complicated subject to learn, but starting with the history of type styles is a great way to gain an understanding of why there’s so many fonts, and why they look so different! Typefaces are divided up into classifications based on the era or characteristics of their design, which helps narrow down your options when choosing a font for your projects. Being able to identify a typeface style can help you make educated design decisions and choose the best font for your work depending on its use. In today’s post I give a brief overview of the main typeface classifications of serif and sans serif fonts that have emerged throughout the history of movable type.

In the middles ages books were hand lettered in the Gothic style that had been developed by scribes, until the invention of the movable type press by Johannes Gutenberg. The first typeface carved by Gutenberg was based on the hand writing style of the time and was used to print the first books in Europe, including the Bible. 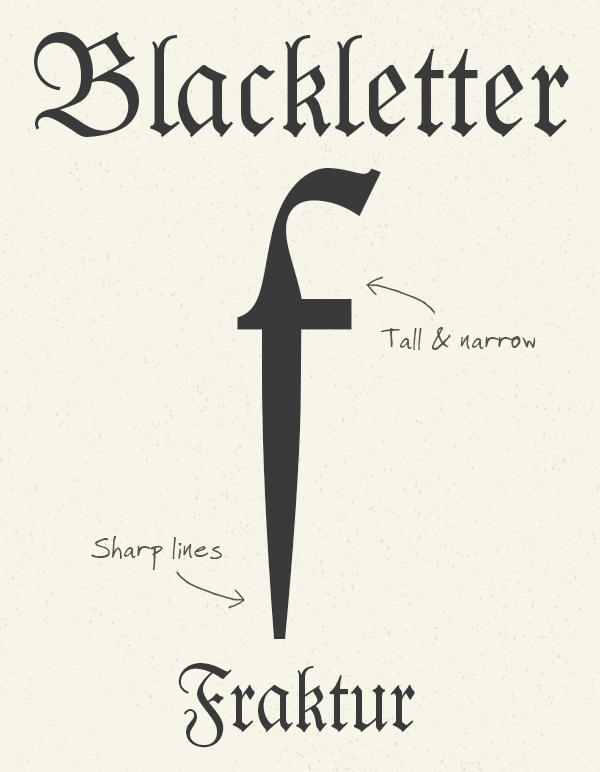 There’s a whole series of subcategories of Blackletter typefaces each with its own characteristics, but they’re all based on the original calligraphic style with tall, narrow letters and sharp angular lines. Fonts such as Gutenberg and Fraktur are popular modern interpretations of the first print typefaces.

As movable type printing became the standard across Europe different typeface styles were developed, but these early typefaces were still based on early hand written scripts so they retained the characteristics of brush/pen lines and serifs on the entry and exit of each stroke. 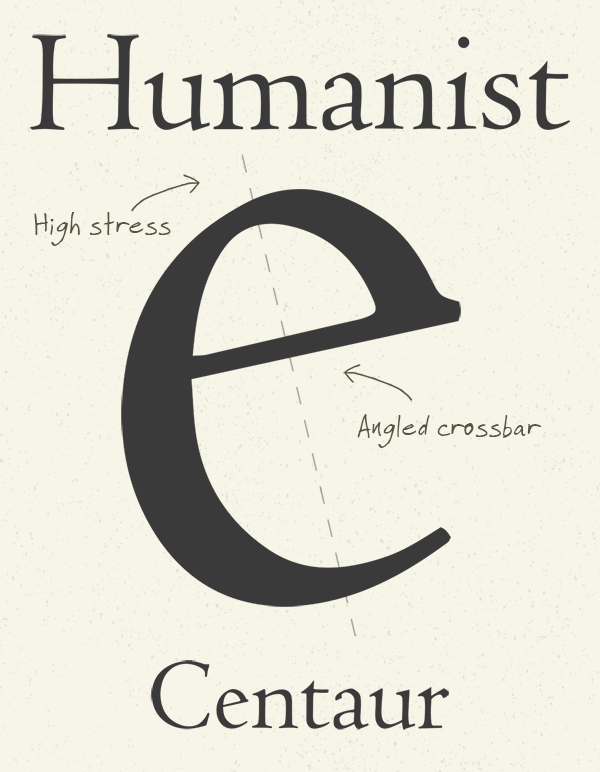 In Italy the German blackletter style was soon replaced with typefaces inspired by Roman inscriptions. Still based on hand lettering, these fonts have the characteristics of angled crossbars on the letter ‘e’ and a high stress which relates to how a scribe would hold a pen. Centaur and Jenson are modern fonts in the Humanist style. 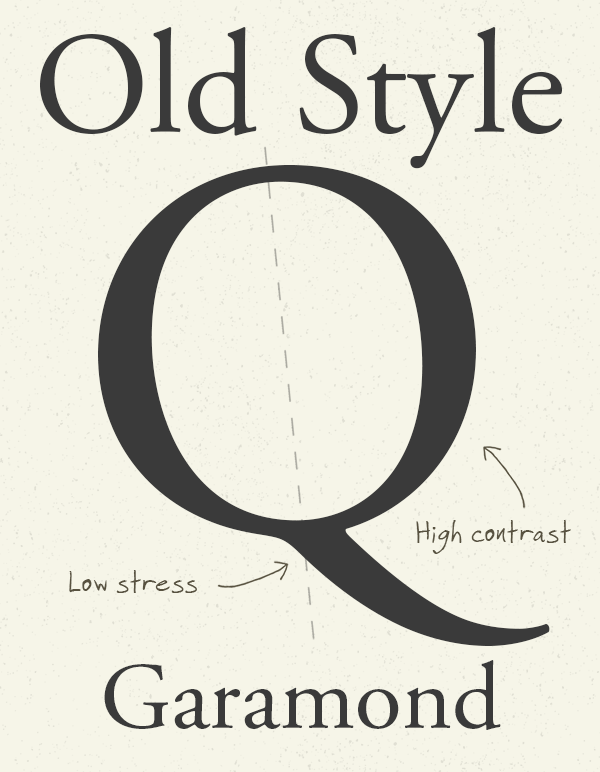 With typefaces now being carved to form printable fonts, typographers began to experiment and design their own type, rather than mimic existing scripts. Fonts such as Garamond and Goudy Old Style are from this era and are characterised with a move towards more upright letters and straighter crossbars compared to previous Humanist typefaces, as well as more variation between thick and thin strokes. 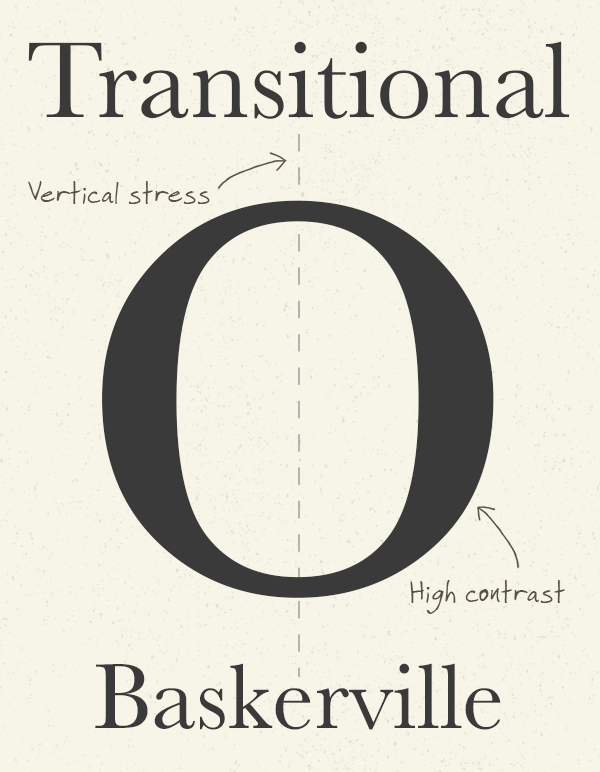 The trend of more upright letters and greater contrast in strokes continued into the Transitional era, which is the period between Old Style and Modern font designs. Transitional fonts such as Baskerville are more elegant with broad strokes becoming much thinner within the character and the stress is now perfectly vertical. 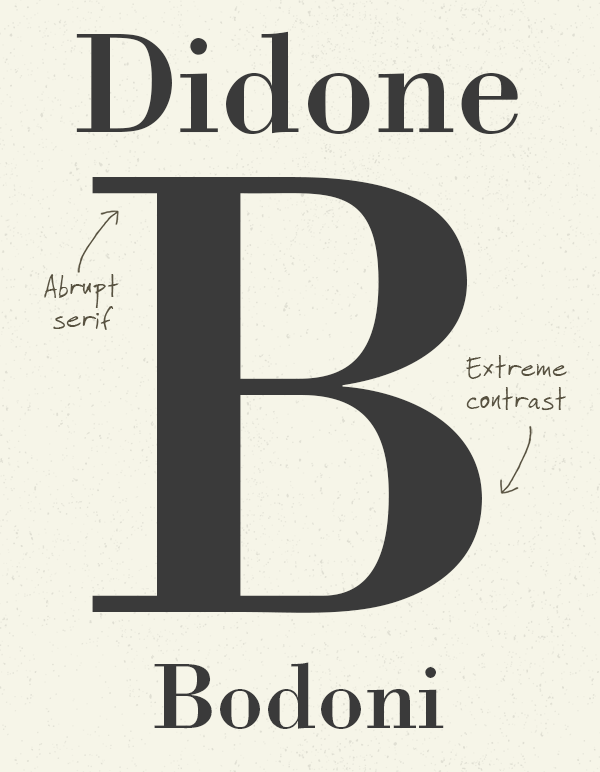 Fonts from the 18th century that took the type design trends to the max were known as Didone or Modern. These typefaces have extreme contrast with broad strokes reducing to thin hairlines, along with unbracketed serifs that abruptly change from thick to thin without a transitional curve. Didot and Bodoni are the two most recognisable Didone typefaces. 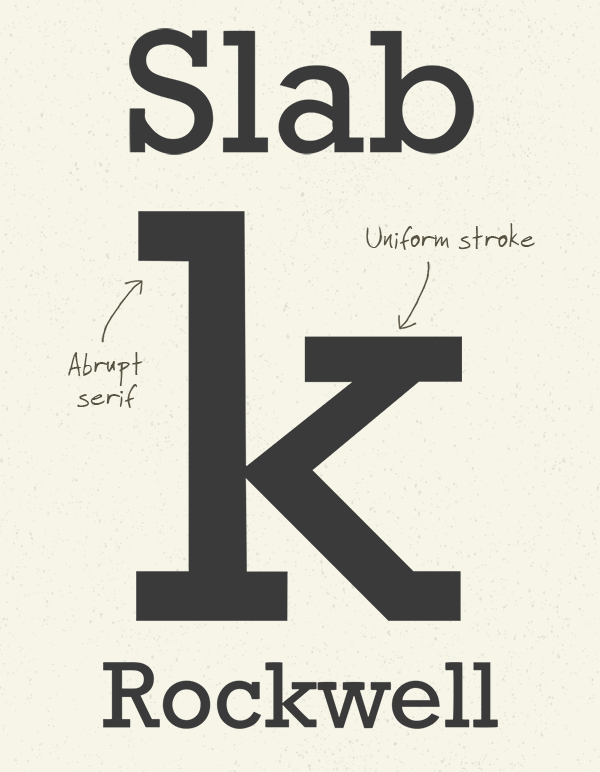 Newspaper headlines and product advertising resulted in more attention grabbing type styles in the 19th century, which lead to typefaces being made more robust to withstand the industrialised printing process. Slab serifs have thick block lines at the end of their stokes. They are sometimes curved as with Clarendon, but most often unbracketed like Rockwell.

It’s clear to see the development of serif typeface styles over hundreds of years, but the 19th-20th century saw an explosion of type design where many of the fonts we use today were made. New sans-serif designs stripped away the handwritten characteristics completely to create modern typefaces that were easier to read at longer distances. 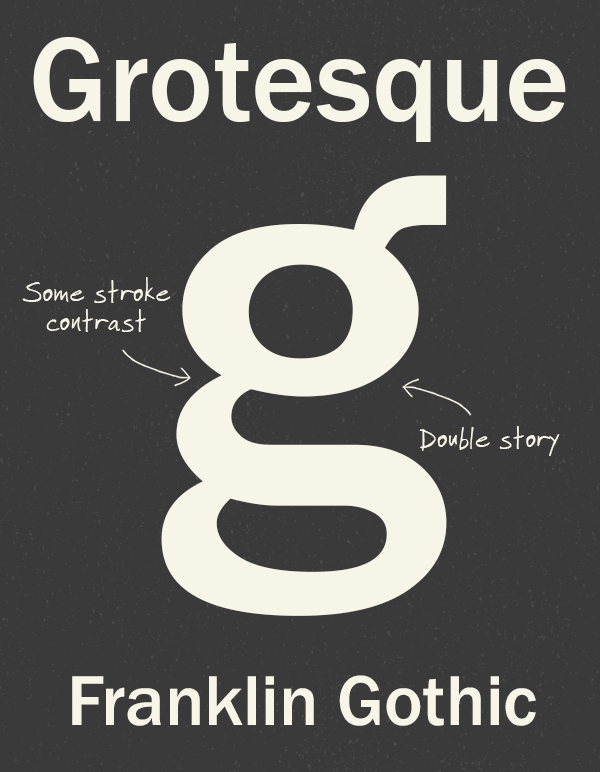 The first sans-serif typefaces were known as grotesque (as in “ugly”), due to their rejection of the elegance of historic serif styles. Some Grotesque fonts have a double-story layout for the letters ‘g’ and ‘a’, as seen in Franklin Gothic. There’s also a little flair left over from the serif era with early grotesques having a little contrast in their strokes. 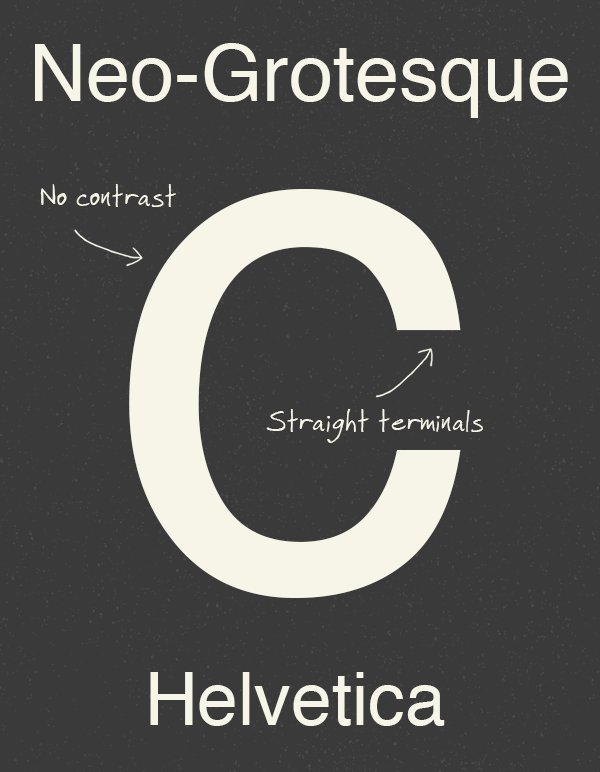 Neo-Grotesque is a sub classification of Grotesque typefaces which refers to the later designs from the 1900s. These fonts completely abandon the traditional characteristics to make them simpler and minimalistic. There’s little or no contrast in the strokes and the terminals are usually perfectly straight, giving them a more geometric appearance. Helvetica and Univers are some of the most popular Neo-Grotesque typefaces. 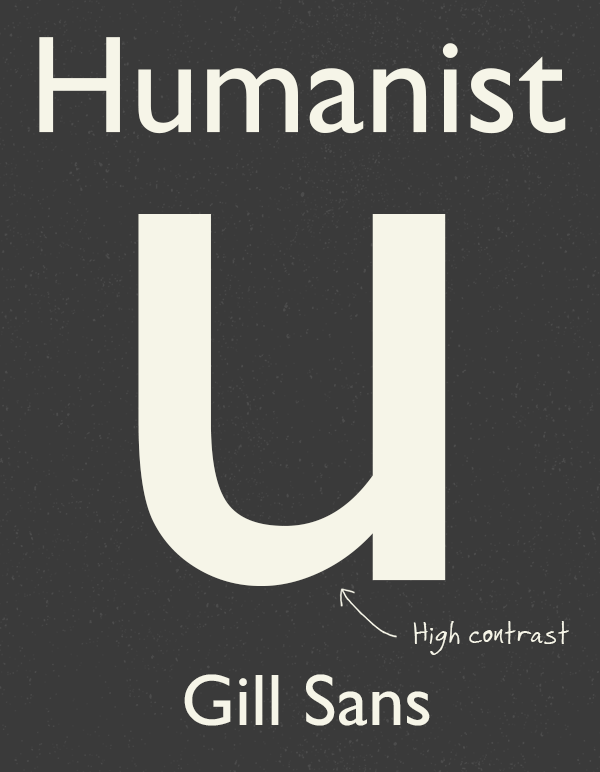 While some typographers were crafting Neo-Grotesque typefaces, others still wanted to retain some elements of “human” writing, so Humanist sans-serif typefaces also emerged in the 1900s. Similar to Humanist serifs, this style includes some stroke modulation to give the letters a friendlier appearance. Gill Sans and Optima are popular Humanist sans-serif fonts. 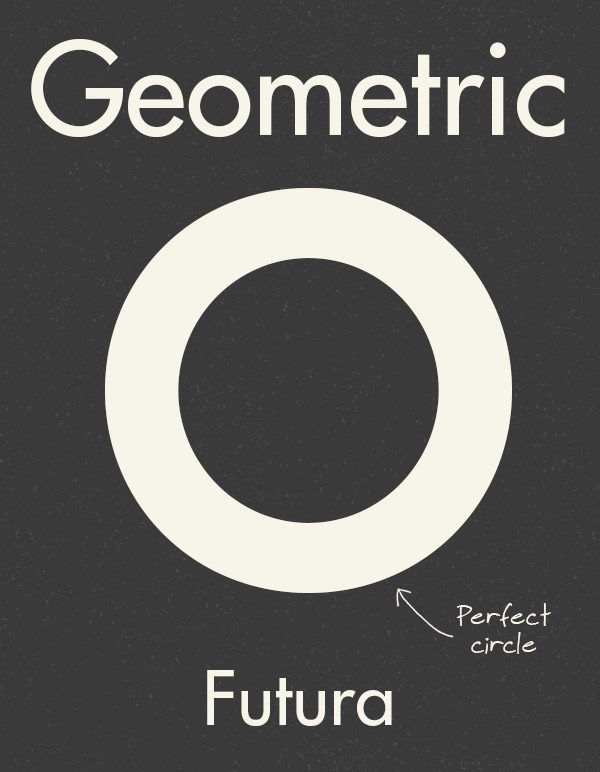 Just like the Modern serifs, Geometric typefaces are the result of taking the design trend to the edge. Geometric fonts go a step further than Neo-Grotesques with their simplicity by basing the letterforms on geometric shapes. These fonts are ultra modern, but their structure makes them awkward to read, especially in lowercase. Futura and Avant Garde are great examples of this style. 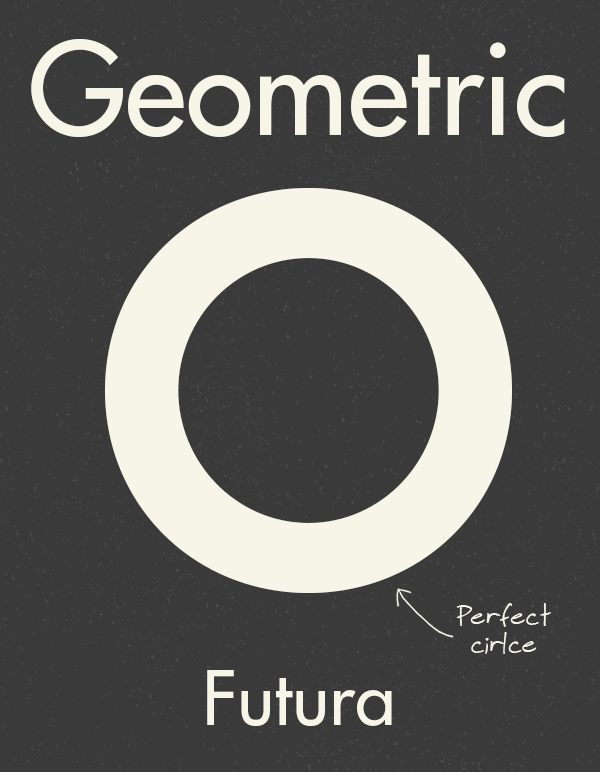